Signed on December 17, 1992, the North American Free Trade Agreement (NAFTA) entered into force on January 1, 1994. Many of its provisions were implemented immediately or within a few years, but a final handful of trade barriers were lifted on January 1, 2008. As a result, North America has become a virtually tariff-free trade zone, and a host of nontariff barriers to international commerce have been eliminated as well. An estimated 14 million American jobs depend on the $3.5 billion in trade that moves across our borders with Canada and Mexico every day. Much of this trade depends directly on NAFTA, which has in turn enhanced the global competitiveness of North American industry in a rapidly changing global economy.

Amid a great deal of misinformation, understanding NAFTA is more important than ever. While the agreement’s impact has at times been exaggerated, it has proven to be one of the most important and beneficial trade agreements in U.S. history. The U.S. Chamber of Commerce urges elected officials and business leaders in Canada, Mexico, and the United States to build on this foundation in the years ahead and consider steps to modernize the terms of trade between our economies to spur economic growth and job creation here at home.

With a two-decade record to examine, it’s plain the North American Free Trade Agreement (NAFTA) has generated substantial new opportunities for U.S. workers, farmers, consumers, and businesses.
• Trade with Canada and Mexico supports nearly 14 million American jobs, and nearly 5 million of these jobs are supported by the increase in trade generated by NAFTA.
• The expansion of trade unleashed by NAFTA supports tens of thousands of jobs in each of the 50 states—and more than 100,000 jobs in each of 17 states.
• Since NAFTA entered into force in 1994, trade with Canada and Mexico has nearly quadrupled to $1.3 trillion, and the two countries buy more than one-third of U.S. merchandise exports.
• The United States ran a cumulative trade surplus in manufactured goods with Canada and Mexico of more than $79 billion over the past seven years (2008-2014). For services, the U.S. surplus was $41.8 billion in 2014 alone.
• NAFTA has been a boon to the competitiveness of U.S. manufacturers, which added more than 800,000 jobs in the four years after NAFTA entered into force. Canadians and Mexicans purchased $487 billion of U.S. manufactured goods in 2014, generating nearly $40,000 in export revenue for every American factory worker.
• NAFTA has been a bonanza for U.S. farmers and ranchers, helping U.S. agricultural exports to Canada and Mexico to increase by 350%.
• With new market access and clearer rules afforded by NAFTA, U.S. services exports to Canada and Mexico have tripled, rising from $27 billion in 1993 to $92 billion in 2014.
• Canada and Mexico are the top two export destinations for U.S. small and medium size enterprises, more than 125,000 of which sold their goods and services in Canada and Mexico in 2014.

Read the rest of the article here. 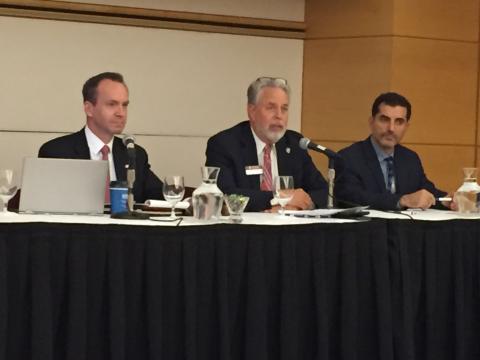 In cooperation with the U.S. Department of Commerce, the 2016 National DEC Forum provided an update on the latest trends impacting exports and your DEC. This year’s Forum activities included the following:

Learn more about the Trans-Pacific Partnership (TPP), Its Importance to You and How You Can Be Engaged.

• Morning Session: International Trade Symposium. Organized in cooperation with the U.S. Chamber of Commerce, to be held at the Vietnam House in D.C. Vietnam is a key player in TPP Negotiations.

• Afternoon Session: Meetings on Capitol Hill with our respective elected officials and/or staff to discuss TPP.

Organized in cooperation with the U.S. Department of Commerce, to be held at the Ronald Reagan International Trade Center building. Come learn about the latest trends impacting exports and your DEC.

Join us at these important events. Details and an agenda will be available as we move closer to the event.

Each year National District Export Council organizes Legislative Summit where exporting community and DEC members come together to share the recent developments and work on the pressing issues on U.S. foreign trade and exporting. This year’s DEC Legislative Summit ​will ​focus ​on ​the ​Trans-Pacific ​Partnership ​(TPP) Agreement. ​The ​Summit ​will ​be ​at ​the ​U.S. ​Chamber ​of ​Commerce ​in ​the ​morning ​with ​the ​afternoon ​being ​devoted ​to ​Capitol ​Hill ​visits. ​

Roy Paulson, President of Paulson Manufacturing and Chair of the National DEC (California Inland Empire DEC member), and Philip Pittsford of NOW International and Secretary/Treasurer and Legislative Affairs Chair of the National DEC (Illinois DEC member), were invited to the White House Business Council–Trade Fly-in Briefing. In total, 9 DEC members were in attendance, from the Arizona, San Diego Imperial, Illinois and Texas DECs along with companies from around the nation present. The briefing was held in the Eisenhower Executive Office Building from 12:30 PM – 4:30 PM.

The purpose of this briefing was to update the attendees about international trade trends and the White House’s position on several key trade issues, among them: Trade Promotion Authority (TPA); Trans Pacific Partnership (TPP); Transatlantic Trade and Investment Partnership (TTIP); and the Reauthorization of the Export-Import Bank of the United States (Ex-Im).
Several senior members of the White House staff from the National Economic Council as well as the United States Trade Representative’s (USTR) office briefed the invited guests on trade issues. The status of several current trade negotiations were discussed along with the benefits of improved trade agreements.
Fred Hochberg, Chairman of Ex-Im Bank, and Maria-Contreras-Sweet, Administrator of the SBA, spoke about their programs and how they support small businesses with loans and other financing. Chairman Hochberg also discussed Ex-Im Reauthorization and his outlook on whether it will pass. While he was upbeat, he did say there was a vocal opposition.
The last panel spoke about USG resources available to help businesses grow their exports. This panel was made up of Arun Venkataraman, Policy Director, ITA, Doug McKalip, Sr. Policy Advisor for Rural Affairs from the White House, and Antwaun Griffin, Deputy Asst. Secretary for Domestic Operations in the Global Markets unit, International Trade Administration. The panelists spoke of various programs offered by such resources and opportunities overseas.
This panel was then followed a briefing from by the Secretary of Commerce, Penny Pritzker, who spoke at length about trade and why it is important. Secretary Pritzker focused on 3 themes:
– Why trade is important
– What the Administration is doing regarding trade
– How the attendees can help move the trade agenda forward
Some other highlights from her remarks include:
– 11.3 million jobs are supported by trade.
– Wages in trade related jobs on average, pay 18% better.
– Trade agreements work to level the playing field for American businesses.
– Trade agreements help to establish the rules of the road and TPP and TTIP are examples
– The Administration is coordinating the efforts on trade
– USG trade agencies officials are being sent around the country to discuss trade issues
– Exporter success stories are needed
Also mentioned by the Secretary were individual companies who have been successful in exporting.
At closing, the group was then joined by Valerie Jarrett, Senior Advisor to the President and Assistant to the President for Public Engagement. She thanked everyone for their efforts in promoting American business and exports and spoke of the commitment of this administration to moving their trade agenda forward.
Follow us on