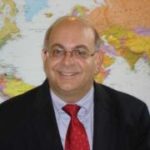 President/Owner, Impex
Kentucky/Southern Indiana DEC
Business Information:
President/Owner
Impex
Web Site: Impex
Richard Grana is president of Impex, providing export management services to the conveyor accessories manufacturers and bulk material equipment manufacturers.  He has over twenty years experience (with Heublein, Genex, Aladdin Industries) in manufacturing, materials management, export and import, international purchasing, distribution and plant start up as well as sales and marketing experience. Since inception in April 1991, Impex has maintained an international sales force for Arch Environmental Equipment by recruiting and training distributors across the globe. Distributor/agents were developed using many different governmental resources such as Agent Distributor Searches, Gold Key, CMA, Commercial News USA, government sponsored Trade Fairs and Trade Shows.  Impex market research and international contacts provided other avenues of additional successful export sales.  Currently, Impex has agents/distributors in nineteen countries and clients in thirty plus countries located in North, Central and South America, Europe, Australia, Pacific Rim and the Middle East.
From 1991-1996 he was a member of the World Trade Council of Middle TN, serving as President in 1993.  He assisted in developing and acted as Director of the International Studies Program in liaison with Middle Tennessee State University; part of Project International-Internationalizing the Curriculum and the Outreach of the College of Business. He was also a member of International Committee for Nashville Chamber of Commerce Partnership 2000 Project -International Business Development Task Force.  Additional, he was a member of the Nashville Area Chamber of Commerce International Business Council from Sept. 2001 to 2004. He was also a member of the TN Export Council.
He has been a member of the KY District Export Council since 2003 and is currently a Vice-Chair serving since 2006.  Since 2011, he has been an associate member of the National District Export Council Steering Committee.    He was also a member and served as Director of the KY Economic Development Finance Authority from 2005-2012.  In 2008, the US Secretary of Commerce and the US Trade Representative appointed him to the ITAC 11(International Trade Advisory Committee on Small and Minority Business) Committee.  He was elected as Co-Vice Chair of ITAC 11 in the spring of 2011 and credentialed as part of the US delegation to the 2011 Asian Pacific Economic Cooperation SME Ministerial Meeting.  In December 2012, he was credentialed as part of the US Delegation to the WTO 8th Ministerial Meeting in Geneva, Switzerland. During the EU-US Workshop on Small and Medium-sized Enterprises (SMEs) in the framework of the Transatlantic Economic Council (TEC), Oct 7-8, 2013 in Brussels; he presented arguments from the US SME's viewpoint.
He received his Bachelor of Arts degree in 1969 from University of Kentucky.  He also completed post-graduate studies at Murray State in 1978 and a Purchasing Management Seminar at Michigan State University Graduate School of Administration that paved the way for certification in 1979 as a Certified Purchasing Manager and he was recertified three times. He was President and held various other officer positions for the Purchasing Management Association of Western KY. Locally, he was member of the Greater Paducah Industrial Development Association from 1984-86; he is a member of Paducah, KY Chamber of Commerce – Governmental Affairs Committee and Paducah Rotary Club.
GroupsAdvisory-Member Trade Policy and Legislative Affairs Committee