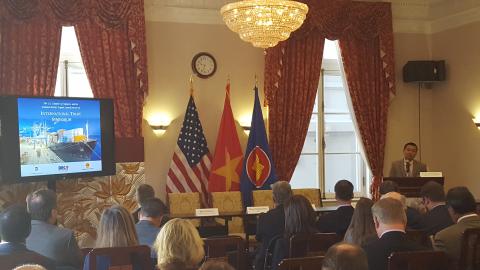 The National DEC will host the annual National Conference of the DECs in Washington, D.C. on October 2-3, 2014. The annual Conference will consist of two events – the 2014 National DEC Forum on October 2 and the Second Annual International Trade Symposium on October 3.
The title of the 2014 National DEC Forum is “Roadmap for Success”. The Forum will consist of three broad themes- 1. DEC Mission Statements and Goal Setting; 2. DEC Website and Social Media Utilization; and 3. Driving Results – Utilizing DEC Committees. These themes were chosen based upon a nationwide survey conducted of DEC Chairs in which DEC Chairs were asked to select the topics they considered to be most important for the success of their DECs. The Forum will include a general overview of these themes and then will break into three individual tracks in which all attendees will participate. As in years past, the Forum has also been designed to engender substantial attendee participation. The Forum is open only to DEC members and associates and is also closed to the media. Following the conclusion of the Forum an evening reception will be held which can be used for networking and which will also be open to invited guests of DEC members.
The Second Annual International Trade Symposium, sponsored by the U.S. Chamber of Commerce. The Symposium will focus on current trade promotion initiatives including Trade Promotion Authority, the Trans-Pacific Partnership, the Trans-Atlantic Trade and Investment Partnership, other pertinent trade initiatives. The Symposium will also examine the current state of foreign non-tariff barriers and market access issues such as standard, intellectual property protection and regulatory barriers. Also invited to participate will be keynote remarks from the Chairman of the U.S. Export-Import Bank and the U.S. Secretary of Commerce. The International Trade Symposium, which will be held at the U.S. Chamber of Commerce, is open to the public.
Follow us on