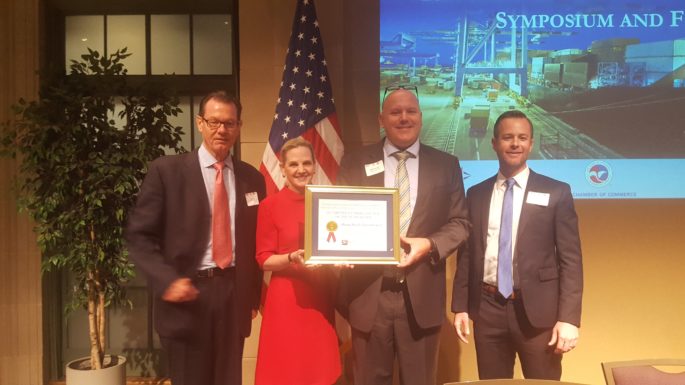 2017 DEC of the Year Award presented to Hawaii-Pacific DEC by Erin Walsh, Asst Secretary and Director General of US and Foreign Commercial Service at the National DEC Export Symposium.

Congratulations Hawaii-Pacific District Export Council! Your achievements and hard work on promoting exports and supporting the exporters in the Hawaii-Pacific region are exemplary! 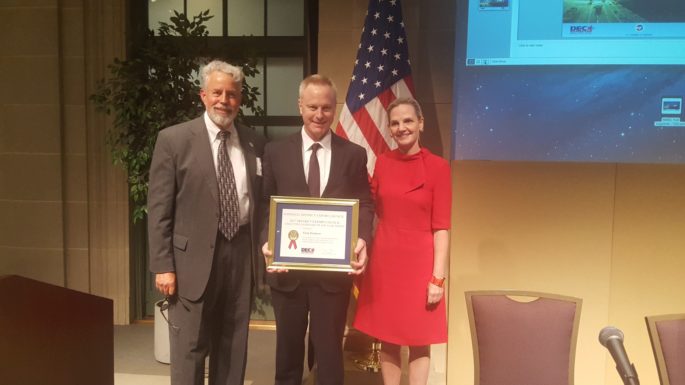 2017 is the inaugural year for the National District Export Council’s Executive Secretary of the Year Award.  We are pleased to be able to recognize the outstanding support provided by our colleagues at the Commercial Service which contributes to the successful operation of a District Export Council.  We received nominations from DECs across the country and had a number of very well qualified candidates.

END_OF_DOCUMENT_TOKEN_TO_BE_REPLACED

In the National DEC Forum, we discussed the key topics in management of the DECs; such as DEC Governance, Strategic Projects and DEC engagement methods.   DEC members dedicated the afternoon session to visits to the Congressional leaders at the Capitol Hill. Evening reception was hosted at the Capitol Visitor Center in conjunction with Center for International Business Education and Research (CIBER).

END_OF_DOCUMENT_TOKEN_TO_BE_REPLACED

Signed on December 17, 1992, the North American Free Trade Agreement (NAFTA) entered into force on January 1, 1994. Many of its provisions were implemented immediately or within a few years, but a final handful of trade barriers were lifted on January 1, 2008. As a result, North America has become a virtually tariff-free trade zone, and a host of nontariff barriers to international commerce have been eliminated as well. An estimated 14 million American jobs depend on the $3.5 billion in trade that moves across our borders with Canada and Mexico every day. Much of this trade depends directly on NAFTA, which has in turn enhanced the global competitiveness of North American industry in a rapidly changing global economy.

Amid a great deal of misinformation, understanding NAFTA is more important than ever. While the agreement’s impact has at times been exaggerated, it has proven to be one of the most important and beneficial trade agreements in U.S. history. The U.S. Chamber of Commerce urges elected officials and business leaders in Canada, Mexico, and the United States to build on this foundation in the years ahead and consider steps to modernize the terms of trade between our economies to spur economic growth and job creation here at home.

With a two-decade record to examine, it’s plain the North American Free Trade Agreement (NAFTA) has generated substantial new opportunities for U.S. workers, farmers, consumers, and businesses.
• Trade with Canada and Mexico supports nearly 14 million American jobs, and nearly 5 million of these jobs are supported by the increase in trade generated by NAFTA.
• The expansion of trade unleashed by NAFTA supports tens of thousands of jobs in each of the 50 states—and more than 100,000 jobs in each of 17 states.
• Since NAFTA entered into force in 1994, trade with Canada and Mexico has nearly quadrupled to $1.3 trillion, and the two countries buy more than one-third of U.S. merchandise exports.
• The United States ran a cumulative trade surplus in manufactured goods with Canada and Mexico of more than $79 billion over the past seven years (2008-2014). For services, the U.S. surplus was $41.8 billion in 2014 alone.
• NAFTA has been a boon to the competitiveness of U.S. manufacturers, which added more than 800,000 jobs in the four years after NAFTA entered into force. Canadians and Mexicans purchased $487 billion of U.S. manufactured goods in 2014, generating nearly $40,000 in export revenue for every American factory worker.
• NAFTA has been a bonanza for U.S. farmers and ranchers, helping U.S. agricultural exports to Canada and Mexico to increase by 350%.
• With new market access and clearer rules afforded by NAFTA, U.S. services exports to Canada and Mexico have tripled, rising from $27 billion in 1993 to $92 billion in 2014.
• Canada and Mexico are the top two export destinations for U.S. small and medium size enterprises, more than 125,000 of which sold their goods and services in Canada and Mexico in 2014.

Read the rest of the article here.

The many trade and investment opportunities existing in key Asian markets were the common theme of remarks by senior commercial officers from the U.S. Department of Commerce at a recent forum in San Francisco.

The gathering was hosted by law firm DLA Piper, a member of the California Chamber of Commerce, on March 30. The officers focused on key issues, opportunities, and the business climate of the countries represented. 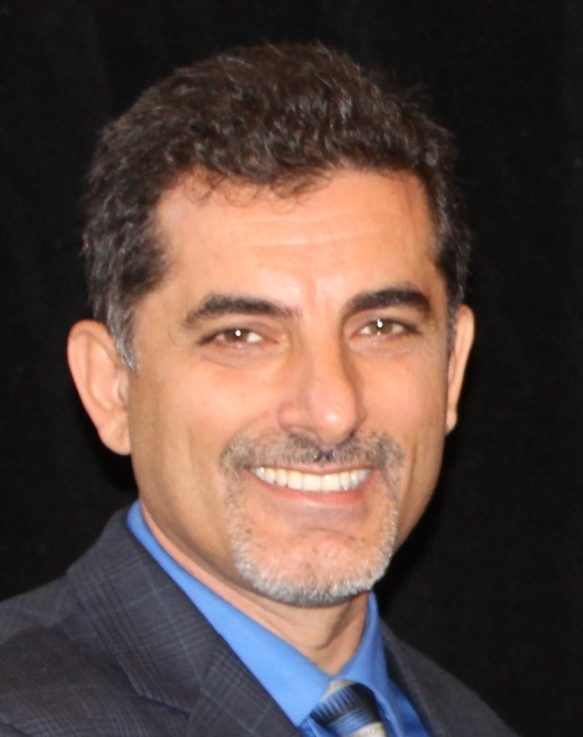 Welcome!
District Export Councils throughout the U.S. strive for increasing the awareness and understanding of the importance of exports to our economy through education, legislative outreach, and engagement with all relevant stakeholders. As the National Association of more than 60 District Export Councils (DEC) our organization's mission includes "Working for America's Exporters".

Our web site is a critical part of that mission. It is important for us to make it easier for you to find the information you need about your DEC, our board members, committees, national and local events, and links to other trade information resources. Take a moment to look around and explore our web site. Thank you for visiting!